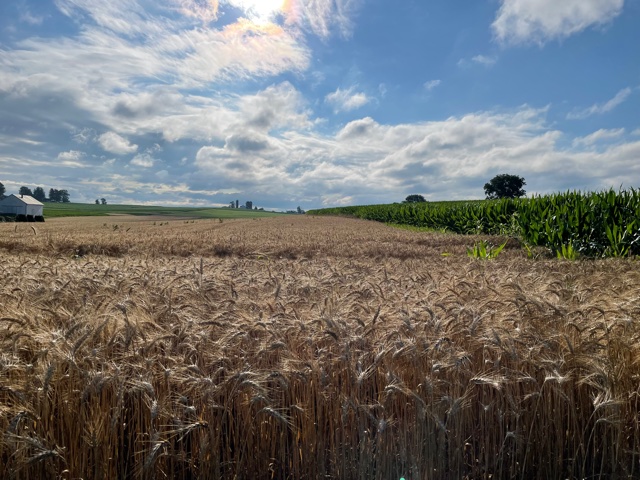 A Kernel of Wheat

A Kernel of Wheat

Most people love the thought of accomplishing great things or being gifted in particular capacities. But they rarely pursue the refining processes and rigors it takes to prepare and be readied. To accomplish great things or go to great heights, you must train, sacrifice and face adversity.

Oftentimes, when life dishes out it’s inevitable challenges like the death of a dream, we surmise that God’s either upset and disappointed with us, or He has deserted us altogether.

I have been watching an old college friend post on Facebook as he trains and competes in Ironman contests one after another.  He just finished his tenth contest! Why is he putting himself through these rigors? Because he wants to compete in the world championship Kona Ironman in the Fall. To qualify you have to first complete twelve full-distance Ironman branded races.  He wants to compete with the greatest and finish the ultimate race. But the price is great to get there!

Great accomplishments come through great sacrifice, and often through a significant level of dying to self and other aspirations.

What will happen to a seed if it’s not planted? It will not amount to anything. It will shrivel up and be useless. Seeds are meant to be planted.

We cannot ask our “Vinedresser- the Father” to bypass the growth accelerators for our lives simply because we are uncomfortable with adversity or with being alone in dark places. To not plant a seed is to condemn it to a menial life where it never realizes its full potential. Seeds are meant to be planted. They are meant to be covered with ground and die.  True life is on the other side.

All people, rich or poor, educated or uneducated, grow best through adversity. Life is a mixed bag of easy and difficult circumstances. And it seems that the more difficult ones reap the greatest return.

At some point in life, we have to allow the Lord to change our mindset. Then we can begin to see that everything that has ever happened to us has happened for a reason. Observing a seedling that pushes itself through the ceiling of dirt above it, reminds us of the reason behind life’s adversity. What was previously invisible and unimaginable suddenly becomes apparent and miraculous as we watch the seedling grow and later reach a fruit-bearing stage.

As I look back and examine the hard seasons of my life, I remember how confused, fearful, and sometimes angry I became in the midst of them. But on the other side of these experiences, it’s easier to see them in the context of the grander narrative.

We see God’s presence and hand at work best in the rearview mirror.

Peering back on over five decades, I see my places of difficulty with a different perspective than when I was in the thick of them. I now understand and see they served an integral part in how God shaped me.  He used them to prepare me for where has taken me, and where He will continue to take me. I can see that each challenging season, time of hardship, sickness, and insurmountable ministry demand, was instrumental in my maturing.

While at times I may have been certain I was about to meet my demise, the challenges of life we’re the seed stages for the next season God was preparing me for in life. God does not produce fruit without frustration. He does not ferment fruit without pressing and squeezing. He cannot not ferment fruit into His wine without our willingness to relinquish it to His winepress.

Though admittedly I have not liked the process, my faith has grown deeper as He shifts my perspective on suffering and life’s challenges. I have come to realize and accept that He never intended to lead me to a dead place and leave me there.

When God buries us He always has our good and a fruitful outcome in sight. The seeming death through which He allows us to go is merely a threshold to a new birth. And new birth is what the planting and death of each seed is all about.

While calling out to God and trusting and worshipping Him in the dark places of life, I arrived at the truth: God was never burying me – He was planting me for greater fruit!

Those seasons and times in which you experience the death of a dream, disappointment of a failed project, or when death seems to stalk your every move, remember these are nothing more than passageways to the next realm God is preparing for you to serve Him. Running away is usually futile.  So why not embrace them as preparations and training in the great race? Sometimes the death of what you are trying to keep alive will enrich your growth and bless the lives of many others.

Remember that God always has your best interest at heart.  Whether facing a layoff, sickness, broken relationship, or death of a lifelong dream, remember that instead of condemning you to a graveyard, which is what you may see in front of you, He is instead planting you in richer soil for greater fruit and a more abundant life.

“Very truly I tell you, unless a kernel of wheat falls to the ground and dies, it remains only a single seed. But if it dies, it produces many seeds.”  John 12:24